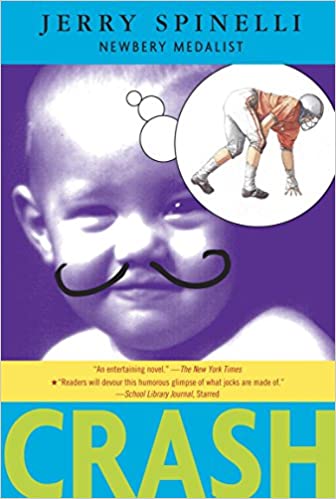 Cocky seventh-grade super-jock Crash Coogan got his nickname the day he used his first football helmet to knock his cousin Bridget flat on her backside. And he has been running over people ever since, especially Penn Webb, the dweeby, vegetarian Quaker kid who lives down the block.

Through the eyes of Crash, listeners get a rare glimpse into the life of a bully in this unforgettable and beloved story about stereotypes and the surprises life can bring.

August Pullman was born with a facial difference that, up until now, has prevented him from going to a mainstream school. Starting 5th grade at Beecher Prep, he wants nothing more than to be treated as an ordinary kid - but his new classmates can’t get past Auggie’s extraordinary face. WONDER, now a #1 New York Times bestseller and included on the Texas Bluebonnet Award master list, begins from Auggie’s point of view, but soon switches to include his classmates, his sister, her boyfriend, and others. These perspectives converge in a portrait of one community’s struggle with empathy, compassion, and acceptance.

The extraordinary number-one New York Times best seller that is now a major motion picture, Markus Zusak's unforgettable story is about the ability of books to feed the soul. Nominated as one of America's best-loved novels by PBS’s The Great American Read.

When Death has a story to tell, you listen. It is 1939. Nazi Germany. The country is holding its breath. Death has never been busier, and will become busier still. Liesel Meminger is a foster girl living outside of Munich, who scratches out a meager existence for herself by stealing when she encounters something she can’t resist - books. With the help of her accordion-playing foster father, she learns to read and shares her stolen books with her neighbors during bombing raids as well as with the Jewish man hidden in her basement.